The twelfth Century Church of St Teilo’s is a Grade 1 listed building and is situated on the edge of the village of the Mardy. Although the present church is twelfth century, the site is an ancient centre of Christian worship. Land was given to Teilo, Bishop of Llandaff, or one of his followers, early in the 6th Century for a Christian cell – “where Bevan and his companions lie buried”. Pertholey means ‘defiled entrance’, possibly a reference to these early Christian martyrs. Llantilio means ‘the enclosure of Teilo’.

Within the churchyard there is an old yew tree which is claimed to be over twelve hundred years old. You will also find a number of Commonwealth War graves from the First and Second World Wars.

Numerous discoveries await the visitor inside the church, for example 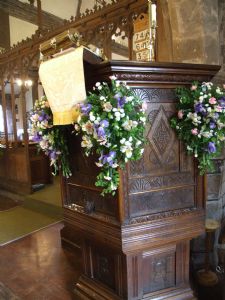 within the bell tower hang six bells, the smallest dated 1665, the largest is pre-reformation and bears the inscription – Saint George pray for us. We are also fortunate to have a number of monuments within the church that were created by Thomas and Aaron Brute.

St Teilo’s is larger and more complicated in plan than most parish churches on the Welsh border. Consequently it can accommodate 180 worshippers. Built on the side of the church building is the Tredilion room, which can accommodate about 20 people and contains facilities for preparing light refreshments. There is also a toilet with washing facilities.

In the last couple of years new chairs have been purchased; a new heating system was installed and the church has
recently been redecorated for the first time in over thirty years.

All this is being done to aid the provision of worship whilst also opening the church up to other appropriate activities (concerts, meetings) which will enable St Teilo’s to continue to serve the people of the parish in the future.

As well as weekly Sunday services, there are also services on Wednesday (9.30am) and Friday (7pm).